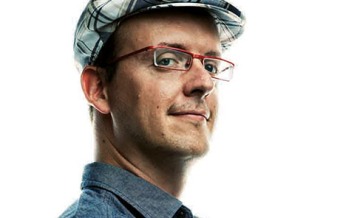 Patrick Meier is a thought leader in the area of innovation and humanitarian aid. His pioneering work has been a major inspiration for the IT Girls as it was presented on the day in which the competition was announced showing how by using IT, development and humanitarian aid could be greatly improved. When it was suggested that we interview him for the IT Girls project, Jeremy had the impression he was asked to email Superman/Superwoman. On a short notice this internationally recognized expert was happy to share a 30 min talk with a small initiative in BiH without asking any further questions. Needless to say after years of following his work on his blog it was a fantastic opportunity to hear about his experiences in encouraging innovation in humanitarian programmes and his thoughts on the role of girls in this process.

Q1: When did you realize the potential of using technology and innovation in the sector of development and humanitarian aid?

It first started during the 2010 Haiti earthquake. My wife was doing research there when the disaster happened and it was extremely difficult to get in contact with her in the initial few hours. From my Boston dorm room I set up a crisis map using the digital platform Ushaidi which used Twitter to map hardest hit areas of Port-au-Prince. The response from crisis responders was very positive and the information we were collecting through Twitter provided valuable information to save lives of people in Haiti. In the area of epidemic mapping I also realized how by mining public data researchers were able to identify a SARS outbreak months before health professionals. This was a wakeup call. The potential of using data and technology in the broader humanitarian space was huge and the possibilities endless.

Q2: How did you overcome initial resistance to innovation?

When I started out there was a lot of sceptics which could have wasted a lot of energy and time. My blog (https://irevolutions.org/) was a great platform to overcome this. I used it as a source of ideas to be shared with anyone that was interested. It was quickly circulated within the United Nations and World Bank networks and people started understanding the value of our work. By using statistical evidence and documenting our success stories people become convinced that this could be useful in their work. The Haiti earthquake clearly acted as a key moment in this sector. The discourse changed between the before and after Haiti because we were able to use crowd sourcing to do something concrete in the real world.

An area where I am working a lot now is in using UAVs (Unmanned Aerial Vehicles) in humanitarian crisis. Most efforts in this area is about documenting and building the evidence base of how UAV can be used for humanitarian purposes. There are many different initiatives in this sector and I just try to get the stories published so that others can learn from their experience. I have created a network of people that are able to fly drones for the purpose of development aid and humanitarian relief called UAViators that enables them to share experiences to learn from each other and set standards for this promising technology which comes with some risks. A recent example I shared was about a company called zipline which used UAVs to ship medicines and collect blood samples to and from remote areas of Rwanda.

Q3: Why is it important to have good IT skills?

One provactive answer is that computer literacy has become a new form of literacy. It has now become crucial to use social media for professional and networking purposes. We communicate increasingly with our community online. So learning how to programme is like learning how to write. It takes a bit of effort but programming has become easier and more accessible and you can use this to have a greater impact in your environment.

With the digital humanitarian network we try to use these skills on improving humanitarian response efforts and restoring livelihoods.

Q4: What are the recent developments in the area of ‘digital humanitarianism’?

There is a shift and understanding that the amount of data generated nowadays is huge. Manually analysing these large amounts is impossible and we need to move towards automation so that decision makers can the right information in a timely manner. This is where we shift in the area of machine computing or so called machine learning. For example in aerial imagery micro satellites and robotics allow us to get better spatial data that which has major implications for crisis mapping. However these high resolution image requires a lot of time to process and this is where machine learning is becoming increasingly capable of doing this with little efforts. It is now possible to get live aerial footage which gives humanitarian responders near real time data for planning.

Q5: What would you say to girls wanting to go into computer programming?

One thing we discovered after the Ushaidi-Haiti Crisis map project (January 2010) was that the vast majority of volunteers were women and that the Ushahidi-Chile Crisis Map (March 2010) was entirely spearheaded by women. There are many ways of entering the digital world and humanitarian relief is one of them.

In this area I think it is quite important to change the digital space. With some partner we are building a network called WeRobotics. The robotics space is gender unbalanced and it will take some time until it becomes equal. And one first step for more women to go into this fascinating world is to learn computer programming.

Thinking of your IT Girls initiative I met a very interesting group of women in Australia (http://www.techgirlsmovement.org/) who have written books to encourage girls to go in the tech field. I really liked their approach and philosophy and I think that these initiatives should be encouraged.